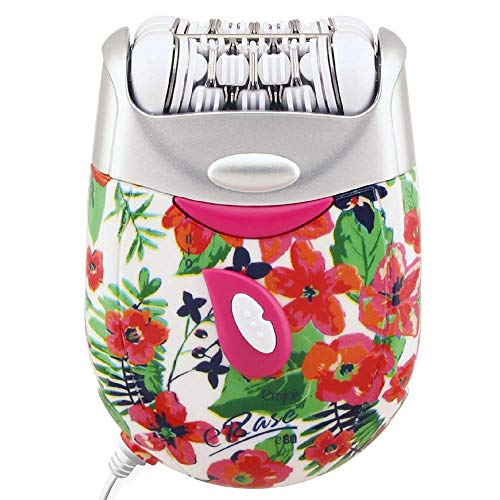 The Emjoi eRase e60 epilator is a compact unit with dozens of tweezers, dual speeds and an included shaver head.

Like all epilators, the Emoji eRase e60 counts on tiny tweezer heads to grasp hair and remove it from the root. It features two, opposing heads that are designed to pull skin taut so that it’s easier to pluck hair anywhere on the body.

The product’s Skin Glide feature gently lifts hair so that each strand is easier to remove. Two speeds allow you to set the epilator at the setting that works best for you.

If you intend to use the product on sensitive areas, such as the bikini area or underarms, you can use the included attachments to increase comfort.

Features That Users Love About This Product

Most of the users who purchased this product use it for their legs, and they find that it produces good results. Those who have used it elsewhere, such as the bikini area or underarms, say it performs okay but that it is more painful to use in these sensitive areas, even when using the included sensitivity cap.

The included shaver head attachment is another feature that many users enjoyed. Even though the epilator plucked most hairs, many reviews liked being able to attach the shaver for one last pass.

Some other features that users like about this epilator include the nice selection of color choices, the extra-long power cord and how it’s easy to maneuver.

Features That Users Do Not Love About This Product

Some users of this Emoji epilator were not impressed with the results they received. Some claimed that the tweezers did a poor job of grasping hairs, which meant that they had to run the device over the same area several times. Others complained that it cut or broke the hairs rather than plucked them.

Another thing that some reviewers didn’t like about this product was the amount of discomfort they experienced. Even those who have used these kinds of devices before admitted that this was a little more painful than others.

Priced at about $40, the Emoji eRase e60 epilator is cheaper than most. While many women were happy with the results they achieved, there were others who weren’t. If you’ve been interested in epilators but didn’t want to spend too much, this one might be a good, affordable way for you to try one out.